Get the Magazine
Accessories, Off-Roading, Overlanding 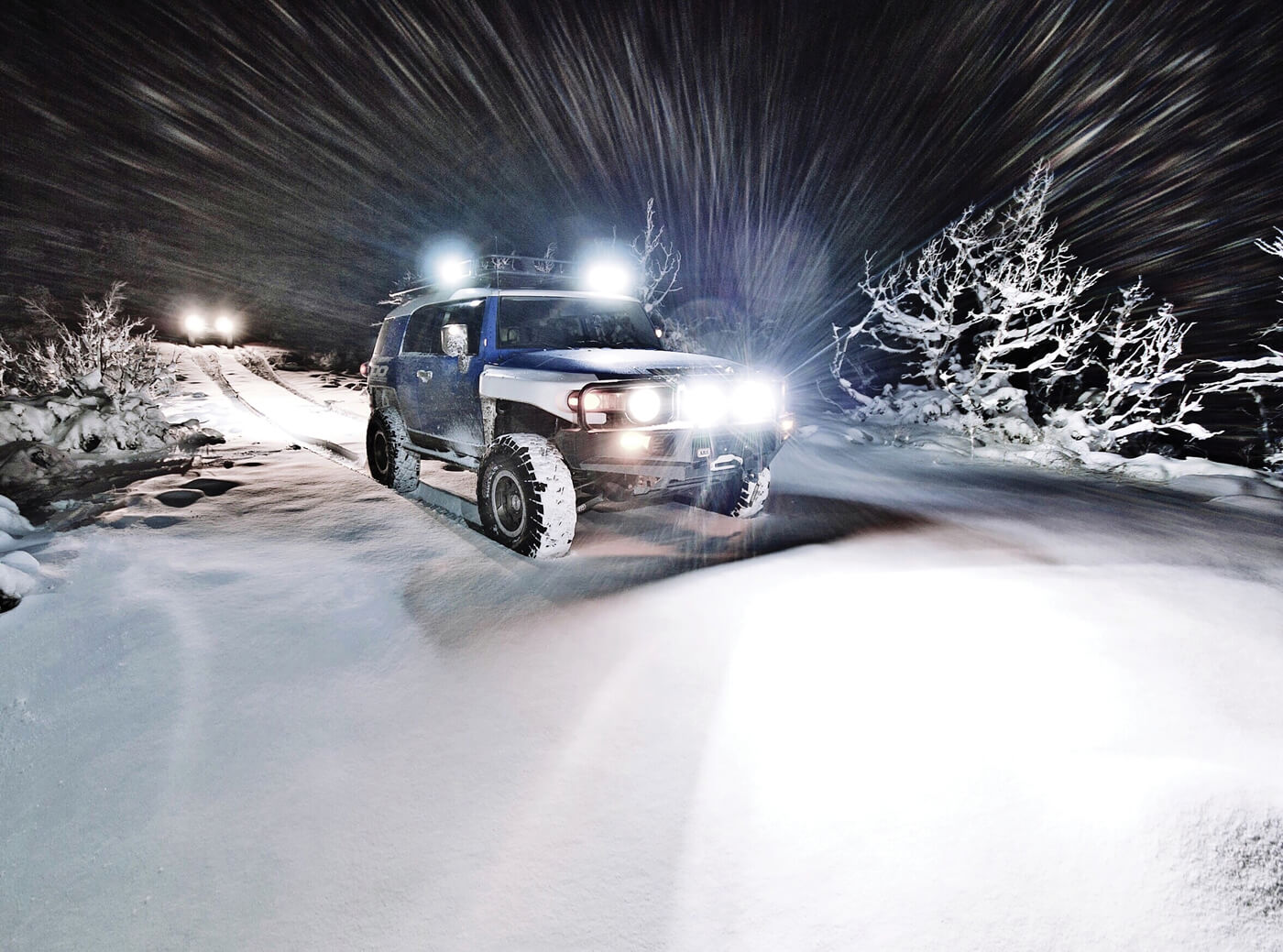 You’ve been out on the trail all day, and you’ve worked yourself further away from basecamp than you thought. With the sun sliding down towards the horizon faster than anticipated, you realize that you might not make it back before dark.

Driving over rough terrain in the darkness isn’t only challenging, it can be downright dangerous. Is that a dip in the road or a 100-foot drop? Fortunately, you’ve outfitted your rig with the latest in vehicle-mounted lighting to figure that out, and get you back to home base safely.

When you decide it’s time to shop for off-road lighting, consider what your intended use will be. Is it mostly for slower nighttime exploring on some of your favorite trails or high-speed bombing down sandy washes? Your application will determine the light pattern and type of light needed for your pursuits after dark.

Modern off-road lighting comes in three varieties: halogen, high-intensity discharge (HID) and light-emitting diode (LED). Each has its purpose, and each varies by shape, dimension, cost and performance. 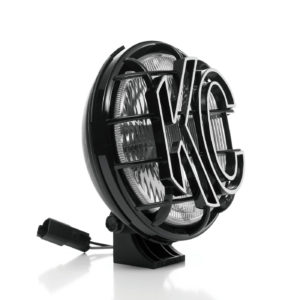 Halogen lights for off-road use have been around for nearly half a century, and they’ve proven themselves to be costeffective. In general, the larger the reflector used with the light, the greater the intensity and efficiency of the light source to direct the beam forward. A pair of quality 55-watt halogen lights may often outperform a cheap LED bar of similar price, depending on application. 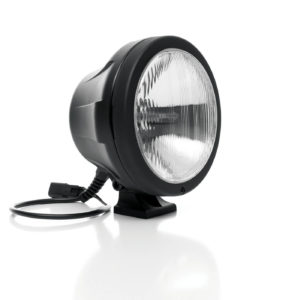 HID lights combine the use of a high-voltage ballast to energize two electrodes sitting inside a sealed bulb containing a noble gas. Unlike a halogen light, there is no filament through which the current passes. 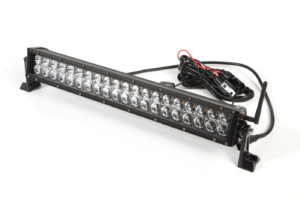 LED light bars can range in size from about six-inches long to more than four-feet long. Light output and power requirements obviously rise for longer bars. One interesting thing to note with LED bars is that damage to a portion of the light may render some of the LED lamps inoperable, but may not destroy the light output of all the lamps in the bar. 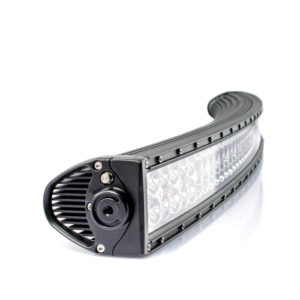 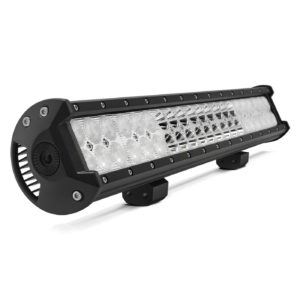 Traditionally, off-road lighting has come in two beam patterns: flood or driving, with the former being a wide, short-distance pattern, and the latter a narrow but far-reaching pattern. One advantage, these days, is that you can mount a single LED light bar offering a combination light pattern: both flood and spot beams. This bar offers a flood pattern from the outer eight reflectors on each side, and a spot pattern from the inner reflector array.

Halogen lights use a tungsten filament encased in a round, sealed bulb with a polished reflector. Inside a filament resides an inert gas used to keep the bulb from darkening over time, as would happen with a standard sealed bulb. The front lens of the bulb can be formed to provide a specific beam pattern, as needed. Halogen lights are typically the least expensive type, and their bulb life ranges from about 50 to 300 hours, depending on power rating.

High-intensity discharge (HID) lights use two closely-spaced electrodes inside a sealed bulb containing a noble gas. A ballast module steps up the vehicle voltage, and creates an intense light discharge within the gas mixture between the electrodes. HID lamps are more power-efficient than halogen lights, and run cooler. With no filament to wear, as with a halogen, HID lights can last for about 3,000 to 5,000 hours of use. 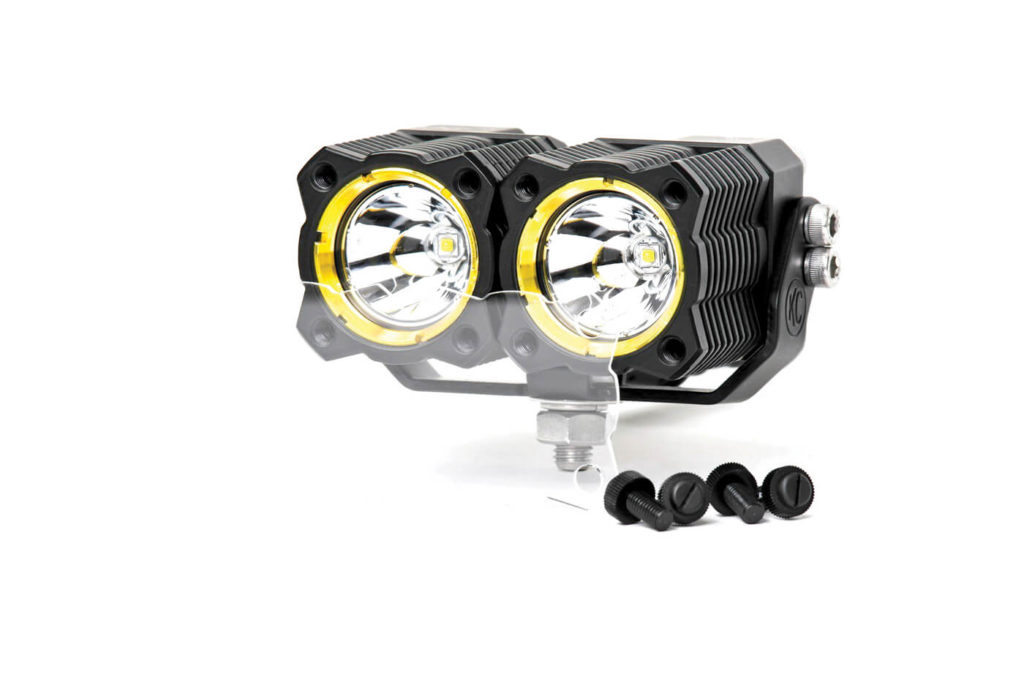 The KC Hilites Flex LED line is a modular lighting system that allows you to create an array of LEDs using any size you want. Lights can be linked or stacked to gain the array you need, including the use of spot- and spread-beam light patterns.

As far as technology goes, halogen and HID advancements are all but dead. Light-emitting diode (LED) lights have become all the rage in recent history and are now seen almost everywhere. In these, electrical current is passed through a semiconductor junction, emitting light. This technique of producing light is by far the most efficient of the three types; plus, LED lighting can be produced to emit a variety of colors and hues of white light.

LED light bars can range in size from about six-inches long to more than four-feet long. Light output and power requirements obviously rise for longer bars. One interesting thing to note with LED bars is that damage to a portion of the light may render some of the LED lamps inoperable, but may not destroy the light output of all the lamps in the bar. 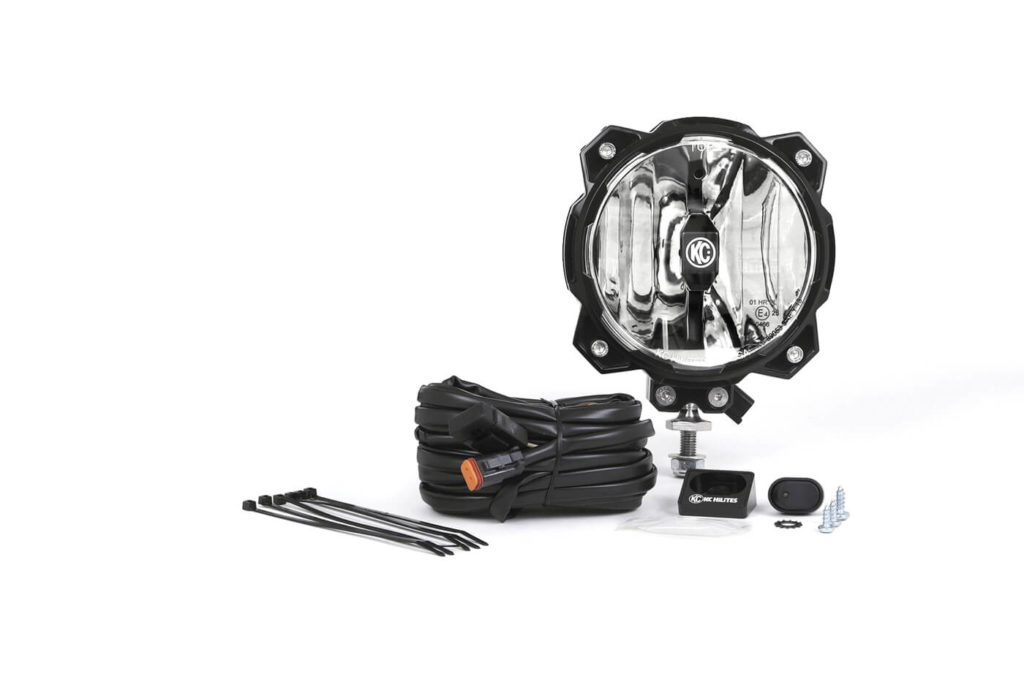 Gravity LED lights from KC Hilites feature a highly-efficient design that directs 100 percent of the light into the reflector so there is no light loss. The reflector has a specifically designed parabolic shape that can achieve SAE/European-certifiable beam patterns that are street legal. Their Gravity PRO light is similar, but with the addition of a projector optic to smoothen the light beam. Small, four-LED pods like these can be mounted for side task lighting, as fog or flood lamps, or for use as reverse lighting. Mounts are also available for some vehicles to mount these small cubes at the A-pillar near the windshield.

LED technology continues to advance—from not only aftermarket light suppliers, but also from the vehicle manufacturers—as they continue to develop LED headlight solutions and push them into mainstream offerings, and not just high-end vehicles.

Additionally, LED substrates continue to improve in efficiency, and thus, power capability. Today’s LEDs can produce more output using less space. It wasn’t long ago that LED lighting simply couldn’t compete with HID units for racing applications. As of late, LEDs have proven they have a place in high-power lighting, and they’re here to stay. 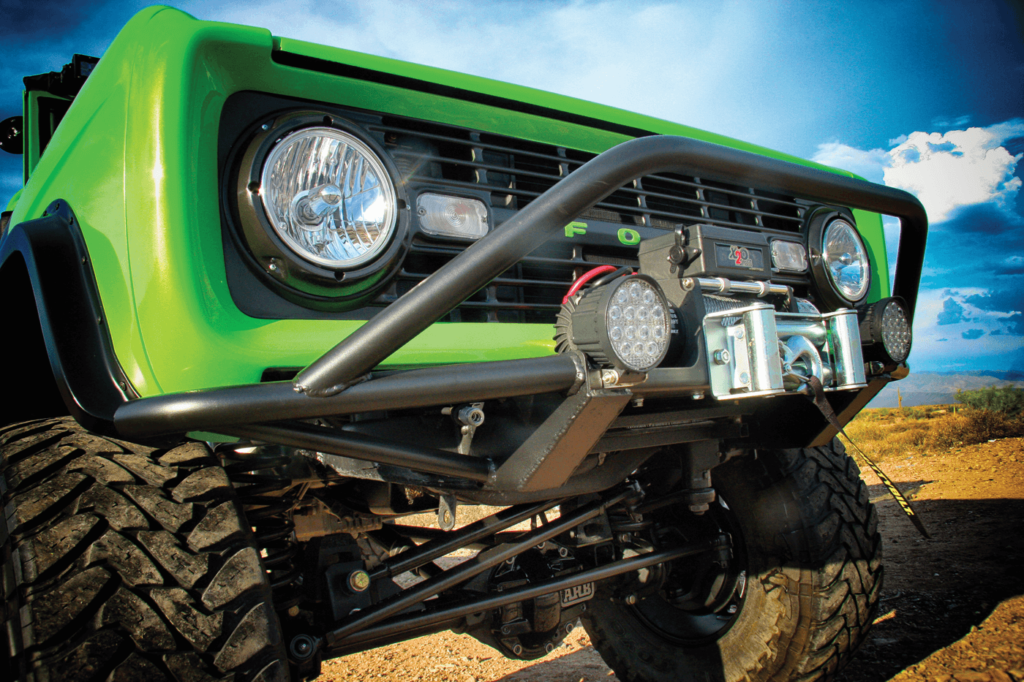 On some vehicles, especially vintage ones, modern LED bars may not contribute to the overall look you want, or fit well in the space you have. An alternative can sometimes be found with round LED lights, available on the market in sizes typical to those found with halogen and HID light housings. Rigid Industries offers a selection of flush-mount LED lights for use in bumpers or on other flat surfaces. These SR-Q backup lights put out a wide, 60-degree lighting pattern using diffused lenses. They were mounted in a plate steel bumper and far exceed the original factory units.

With LED lighting, there are generally two types of optical technology that light manufacturers use to create the projected beam of light: lens optics and reflector optics. These are the means by which the various manufacturers obtain beam patterns and lighting output. Lens optics use a medium to manipulate the beam. These offer a smooth/ uniform beam but are typically limited by existing, ready-made optics that may not provide good automotive beam patterns. Reflector optics use reflectors to refract the beam, offering an intense beam and custom patterns, depending on reflector design. However, efficiency may be limited by how much light is redirected by the reflector.

One can often position a combination of lighting both above the bumper and overhead, if needed to accommodate multiple lights for multiple uses. In some cases, halogen or HID lighting might be combined with LED units to achieve an overall lighting suite that meets all of the driver’s needs.. 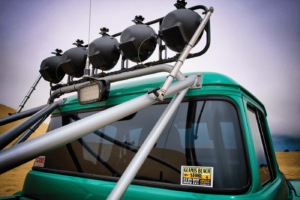 An advantage of overhead-mounted lighting is that it can give you better depth perception of the terrain by shining somewhat downward into ruts and holes. However, some drivers find it uncomfortable driving “under the light,” and you may also have issues with light reflection coming off the hood of the vehicle. 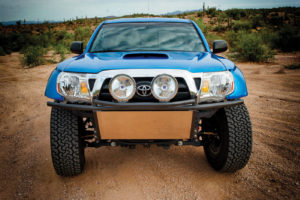 A word of caution regarding mounting large lights (or winches) above the bumper, in front of the radiator: It’s possible to block too much frontal air flow to the radiator, which can cause overheating..

There are a few minor downsides to adding external lighting to your rig. First, it does offer some wind resistance, as would most any item added to the body of your vehicle. Second, some lighting may cause a whistling noise at high speeds. However, the advantages of having good illumination after the sun sets can greatly expand your ability to explore trails without daylight.

Editor’s Note: A version of this article first appeared in the Winter 2016 print issue of Tread Magazine.