Get the Magazine
Features, Off-Road
by Bryon Dorr This 2005 Subaru RHD Legacy GT Wagon has quite a story, and isn’t at all what it looks like at first glance. The 2005 GT Wagon is a sought-after model because it is the only year Subaru made a manual turbo wagon in Legacy trim for the U.S. market. Jonny Walker bought this superclean example in 2008. Initially, he planned to do some basic bolt-on mods in a street-style build that he could daily drive and take to car shows. As you can see, Walker’s plans changed drastically! 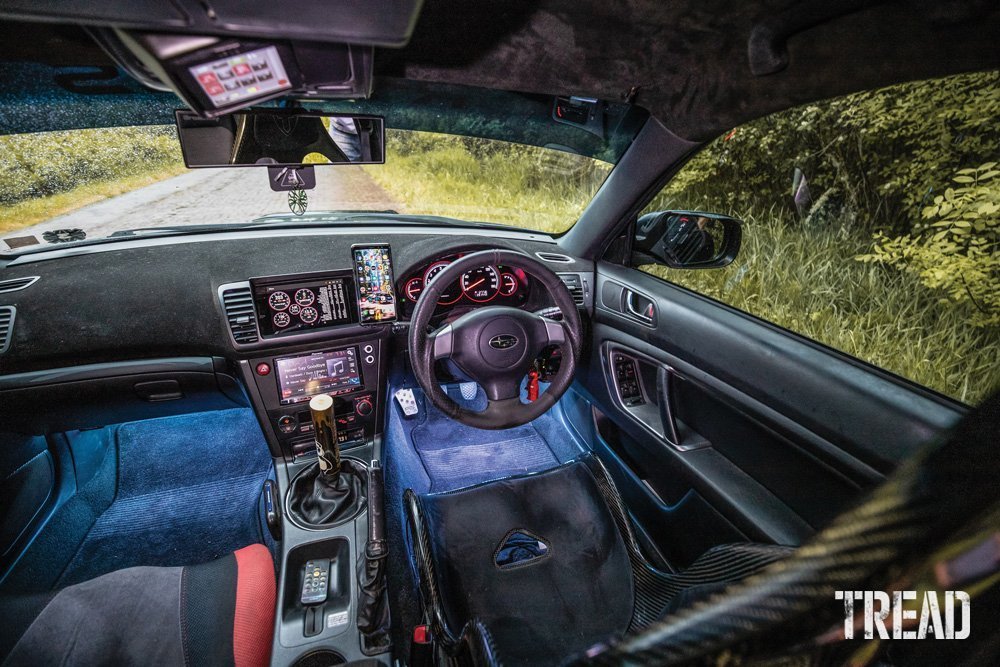 While it might look like a Japanese import, it is in fact a U.S. spec car with a right-hand-drive conversion.

Walker enjoyed his manual turbo wagon for about nine years before a crazy opportunity presented itself that led the car down the path you see today. In 2017 Walker found a full ’06 Japanese Domestic Market (JDM) right-hand-drive Legacy GT front clip for a price that he just couldn’t pass up. He’d always wanted an RHD car, but also wanted something much newer than the 25-year U.S. import laws would allow.
Just under six months later Walker had a full JDM RHD converted mid-’00s GT Wagon, which was fully legal on U.S. roads. He says he’ll never again swap an LHD car to an RHD, as the process was a major task. Everything was swapped over from the JDM donor front clip. This included the firewall, dash, ECU, wiring harness, and motor. While the car was completely torn apart, Walker also upgraded and cleaned up everything inside and out on the car. 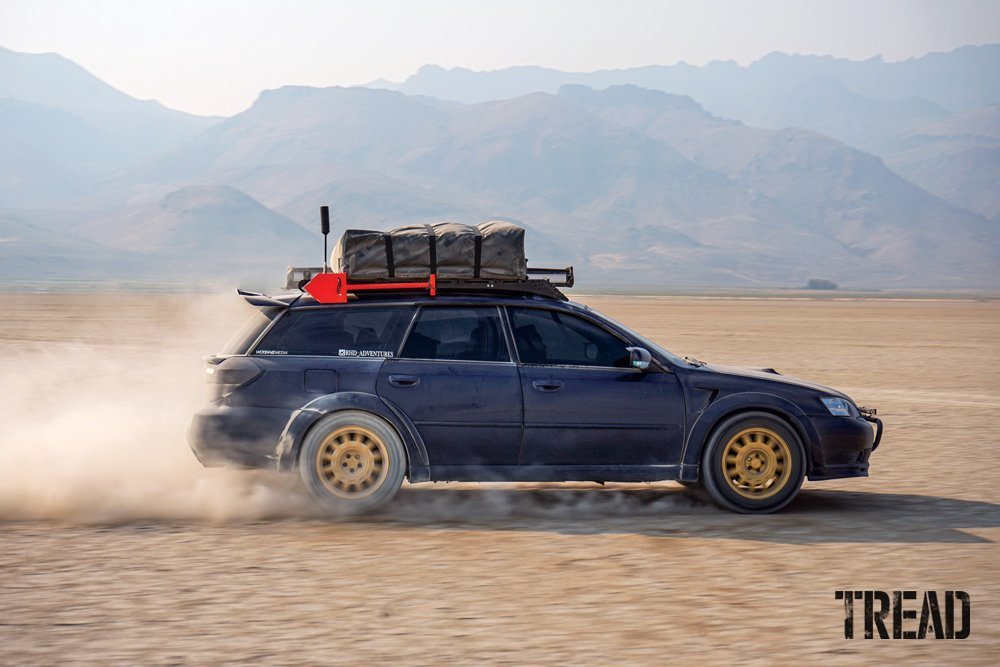 While Walker had been competing in car shows since 2008 with his clean, rare wagon, this RHD swap took it to the next level. To date, Walker believes there are only five Legacy and Outbacks from 2005-2008 that have been converted to RHD here in the states, with three of those owned by the same car guru in Texas.

Walker lives an adventurous personal and work life that finds him traveling all over the planet. He has worked for long stints down in Antarctica and also spends most summers traveling between Seattle and California for work. Walker would drive up and down the West Coast, often between jobs, taking a few extra days between locations to find adventure. His coworker is a more traditional camper/hiker/backpacker, which really shaped the direction the Subaru build and adventures took.
After a summer of trial and error as well as lots of research, Walker decided that he’d build a hybrid on-/off-road adventure wagon. He also wanted the car to work as his daily driver and still be clean enough to enter into car shows. The eventual goal is to drive this wagon up to the Arctic Circle, “because it’s not very often you can say you’ve been not only to the top of the world, but also the bottom.” That’s a lot to ask of a single vehicle, especially a Subaru wagon! 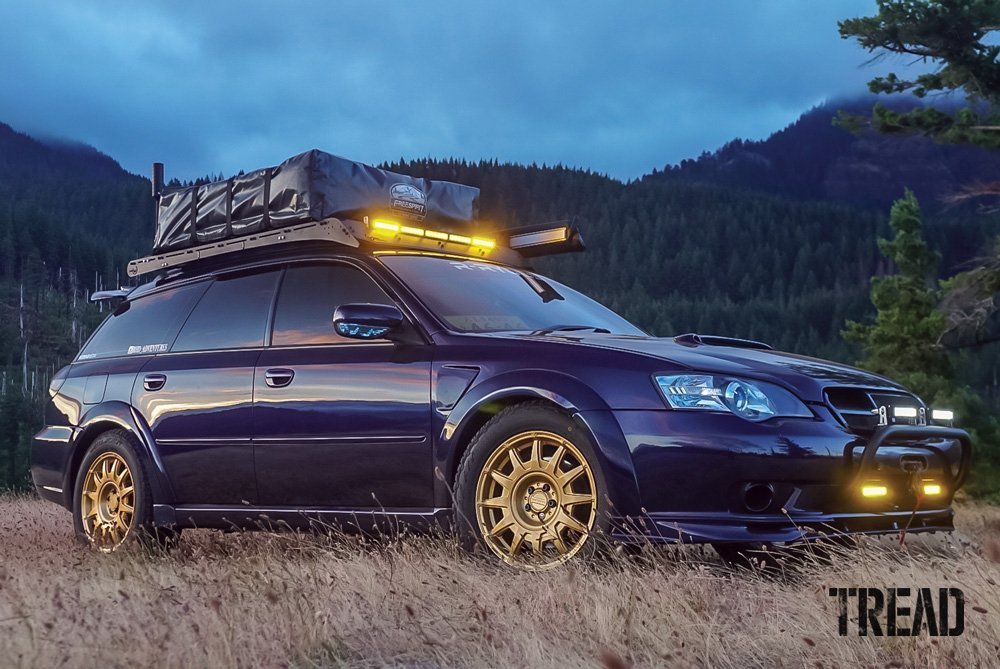 The biggest challenge in building a small adventure rig is not only weight, but space. The first iteration of Walker’s overland wagon was a basic setup with a hatch tent, tiny awning, and 4-gallon Roadshower. While the setup worked, Walker found that everything had to come out of the back to go to sleep, a little awning does nothing for you in the rain, and he’d wished he’d purchased a larger Roadshower.
The overland-style build transitioned from there to what you see today. The upgrades started with a first of its kind Prinsu roof rack. On that roof rack is a Freespirit rooftop tent, a 6-foot awning, and a Readylight. 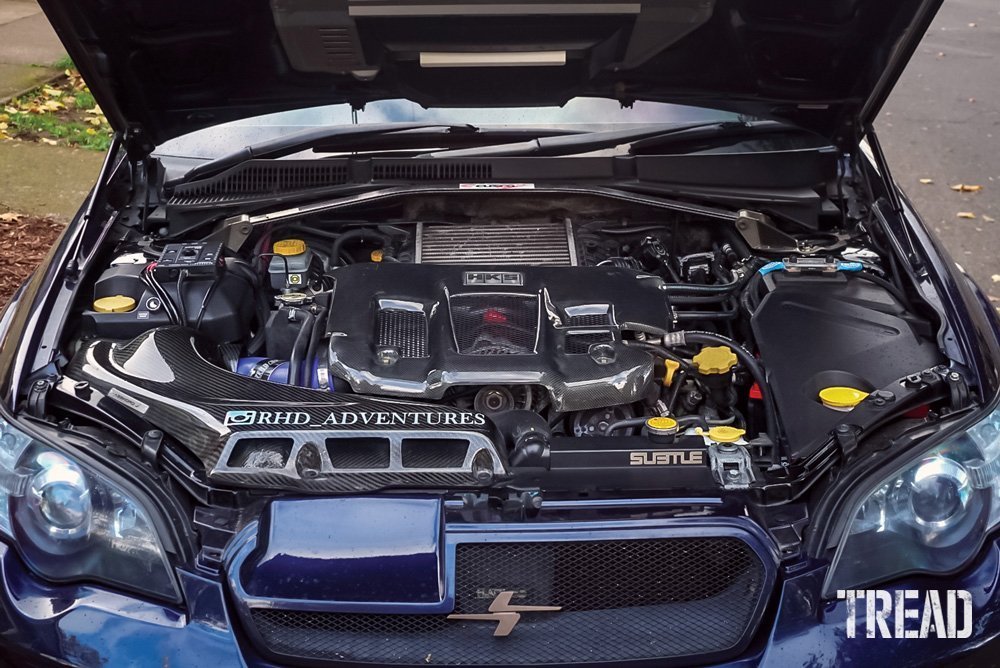 An ’06 JDM EJ20Y engine has been swapped into this Legacy GT Wagon, with lots of tasty mods on that motor.

Besides the RTT, living systems on board this adventure wagon include a Dometic fridge, propane campfire, and Blackstone griddle. A Front Runner 13.7-gallon freshwater tank lives behind the rear seats. A propane hot water Joolca Nomad shower/sink provides running hot water, a much-loved luxury on Walker’s adventures. Staying connected to the world is many times essential in today’s busy lives, and a WeBoost cell booster has saved Walker a few times, once when he was completely lost and needed a connection to find his way.
Adventure travel in our modern times requires lots of electricity to keep accessories and electronics powered up. The electrical gurus at Medlock and Sons in Seattle made two Odyssey Extreme batteries fit underhood, one in the fender behind the front bumper and the other in the factory location, in custom battery trays. The batteries were joined together with a Genesis Offroad dual-battery kit and controlled with a sPOD Bantam unit. The sPOD digital touch screen controller was then mounted in a custom fiberglass mount that replaced the ceiling sunglass holder. 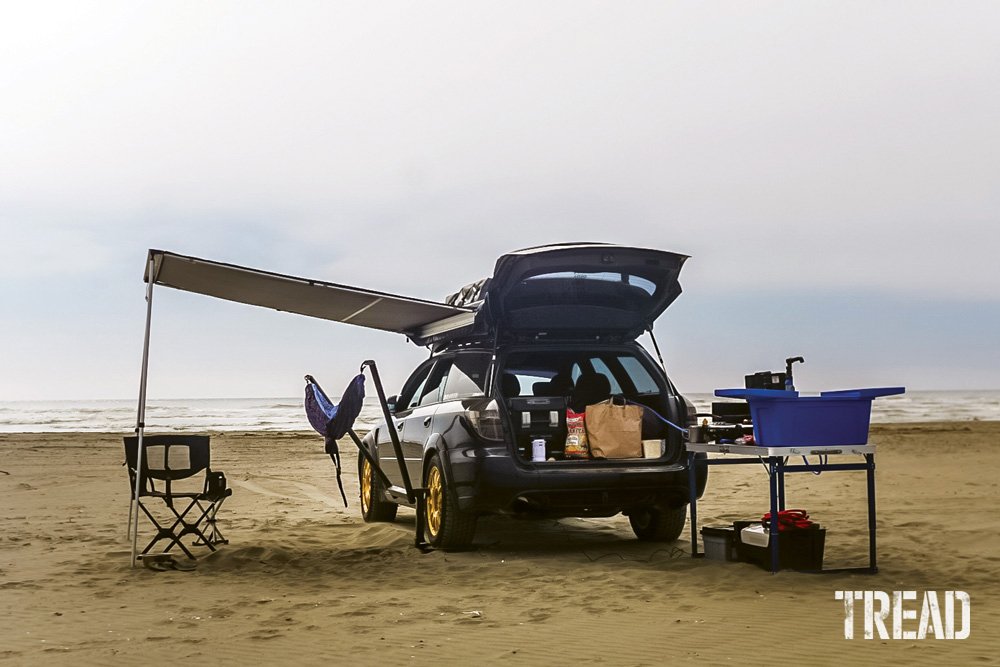 Home is where you park it, and with this Subi adventure wagon that can be a lot of really cool places.

A big change in the build was the suspension. Switching from a street build to off-road capable build was no easy task. Walker ended up going with custom coilovers from Shockworks out of Australia. He then had Hybrid Air in Canada upgrade the coilovers with an air system that provides 2 to 4 inches of height adjustment at the touch of a button. This setup works perfectly for providing off-road clearance while also retaining the street height look and a quality ride on most terrain.
Off-road recovery was next up on the build sheet. A Primitive Racing hidden winch mount was installed by Wanderlust Overland behind the front bumper, holding a tiny Warn Axon 55s powersports winch. The little winch is just enough to help this Subaru through tough situations (and has paid for itself a few times over already). Onboard air ensures Walker can air tires up or down easily as conditions change. 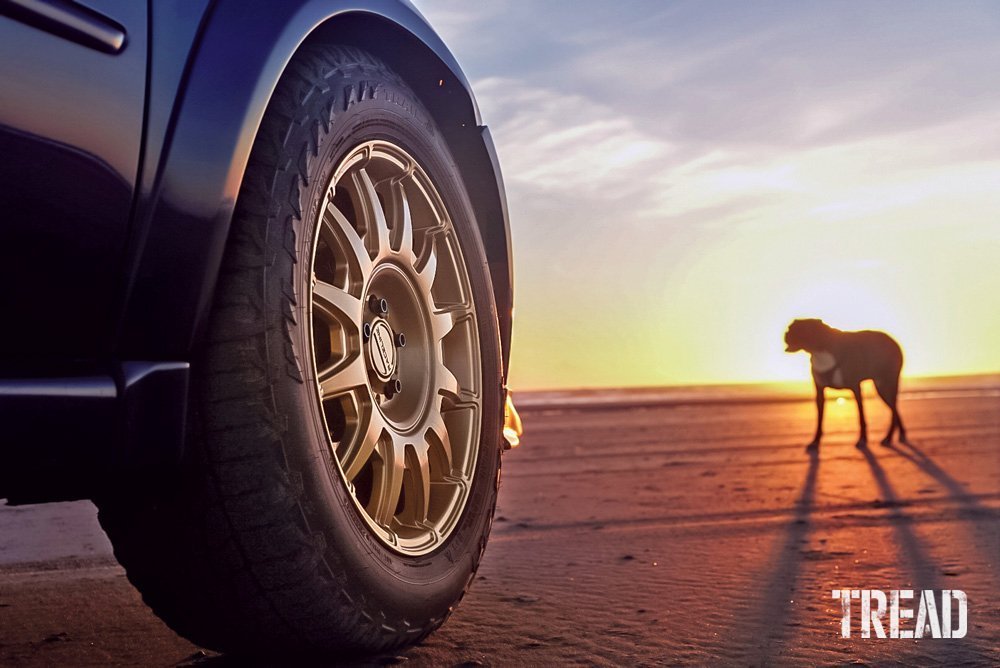 Epic sunsets with good friends, especially the fourlegged furry ones, are always a good time.

In order to not need that recovery gear as often, Primitive Racing skid plates and rear diff protection were installed. Also a custom Rallitek lightbar and Diode Dynamics lighting light up the night when Walker doesn’t quite make it to camp before the sun sets.
Next up was more traction, and Walker was lucky enough to get one of the early Torq Masters rear lockers for his RHD Subaru Legacy Wagon. Not to stop there, Walker is currently having an upgraded dual-range gearbox built down in Australia, with gears First through Fourth, plus the transfer gears being shot peened to take the abuse of the turbo motor. A few parts that will go in soon also include a Torsen front limited-slip differential and a DCCD five-speed controlled center differential. On- and off-road, this Wagon looks good from any angle.

No good overland build is complete without the proper wheel and tire package. While Walker has loved his 18-inch Work Wheels for the past six to seven years, it was time to switch them out for a setup that could take the abuse of the off-road adventures he was regularly enjoying. It was getting so bad that he was fixing one to two wheels every time he came back from an adventure. 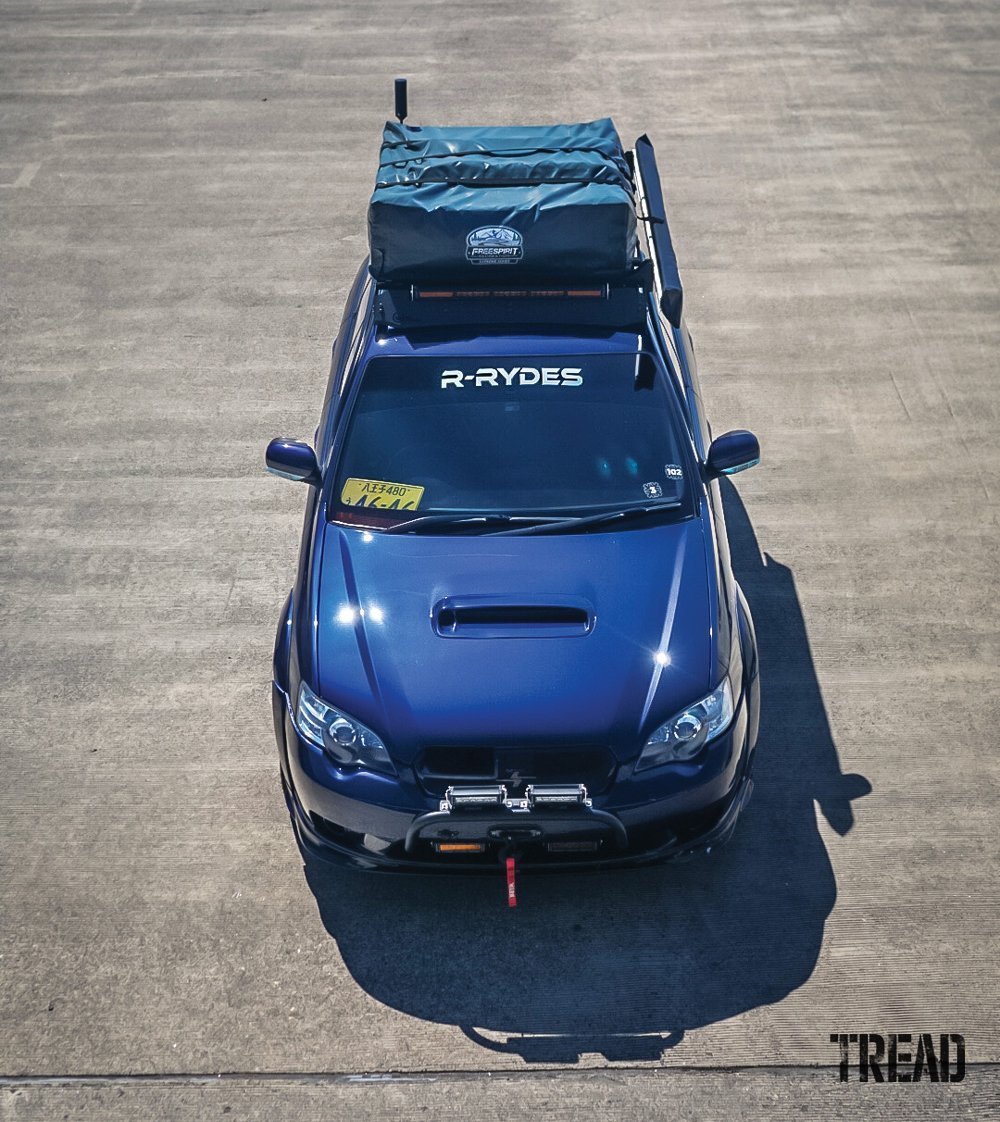 This Subi wagon is always ready for adventure.

Walker recently got his hands on a set of Raceline 401 Aero wheels, which were just released for the smaller adventure vehicle crowd. He wrapped those new bling rims in Falken Wildpeak AT3W tires. Walker says he should have prioritized this mod earlier, as the extra sidewall of the tires provides better ride quality and the ability to air down. The wheels are also much stronger and have no issues taking the abuse his adventures in the Subaru RHD Legacy Wagon have been dishing out.

Always More Mods To Do

Builds like this are never done, and a set of Maxtrax and some Factor55 parts are next up on the recovery gear to buy list. Big mods already in the works are rock sliders by Rallitek, a rear tire carrier, and a full kitchen setup being designed and fabricated by Indigo Metal Fabrication. Because space is at a premium in this little wagon, Indigo Metal Fabrication is going to also pull and replace the rear side windows with custom storage compartments. 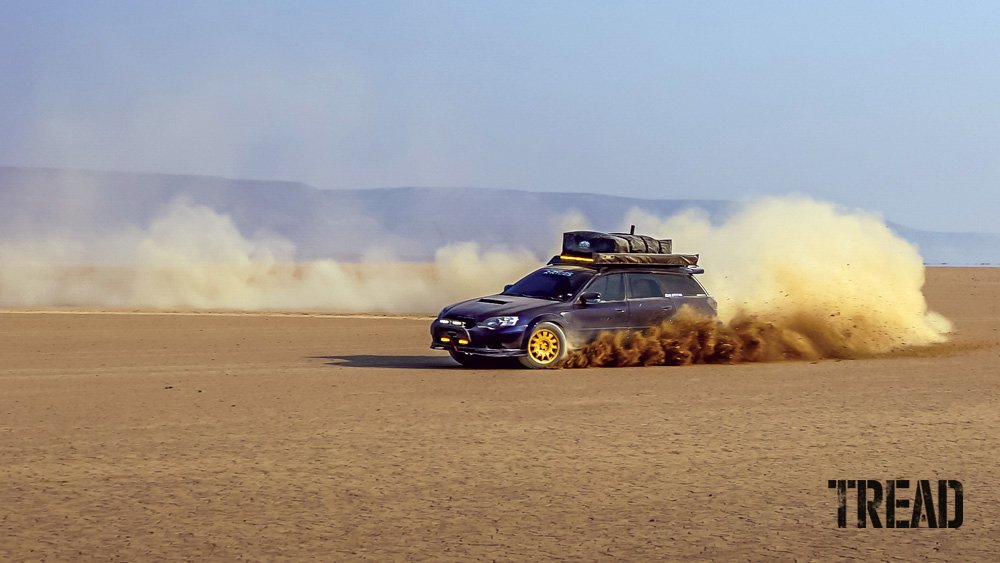 Off-road terrain doesn’t have to be full of rocks and obstacles.

All the extra weight in this vehicle of course also means more power is needed to get it through obstacles and down the highway. More performance parts from Japan are already on order. Because of the extra weight being added soon to the rear of the vehicle, the rear suspension will also need to be upgraded.

Walker wants to thank all the sponsors and partners who have helped him make this dream build a reality. Some of those companies are Prinsu Design Studio, 4×4 sPod, Torq Masters, Primitive Racing, Odyssey Battery, HybridAir, Subtle Solutions, Warn Industries, Diode Dynamics, McClean Metalworks, Gately Audio, Audio Dynamics, Medlock and Sons, Raceline Wheels, Falken Tires, Lolo Overland, and many others.
To follow the adventures of this incredible build, follow Jonny Walker on Instagram
@rhd_adventures. 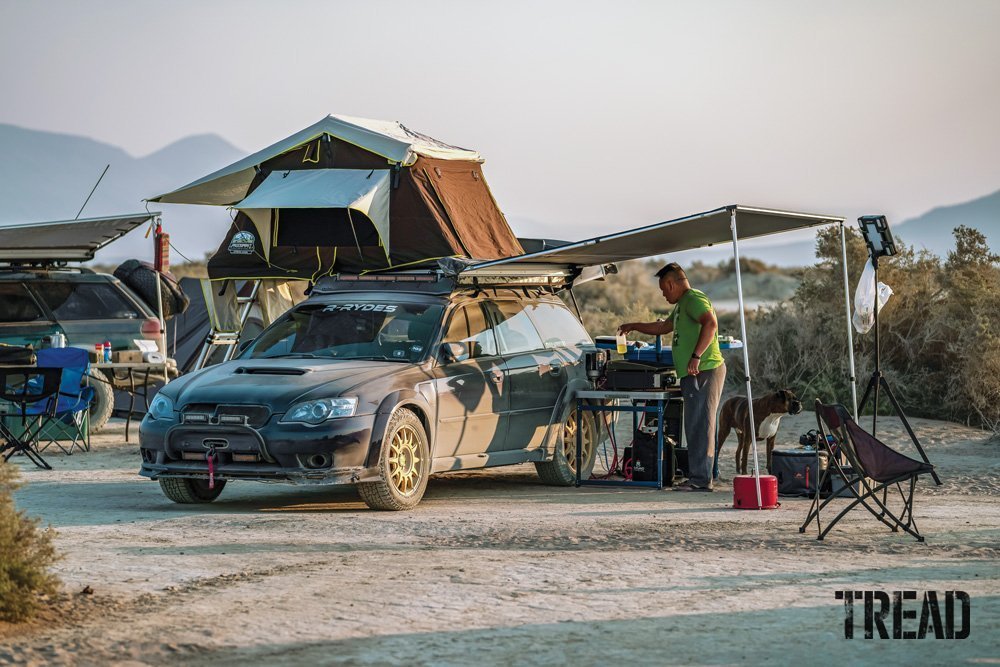 Camp life is the good life, especially when shared with friends. Where will this adventure wagon take Walker next?