After father Dennis Wolf died in 2014, his family knew they’d keep his cherished 1969 Ford Bronco. Wolf bought this Bronco new in 1968 and cherished it so much he even kept a carbon copy of the original order slip. Therefore, old iron has many stories to tell—this one included.
Although Wolf’s Bronco sat for nearly 25 years (it was last registered in 1995), it was brought back to life by his family. As they slowly restored it, they had every intention to “just get it running again.” Little did they know this 51-year-old 4×4 would captivate many lives as it motored its way through the California and Nevada deserts during the 2020 Rebelle Rally. This 1969 Ford Bronco stood out so much we jumped at the chance to feature this unique adventure rig. From the late, great racer Rod Hall to this new Rebelle Rally team, the early model Ford Bronco has been an iconic machine for off-road racers over a multitude of years. 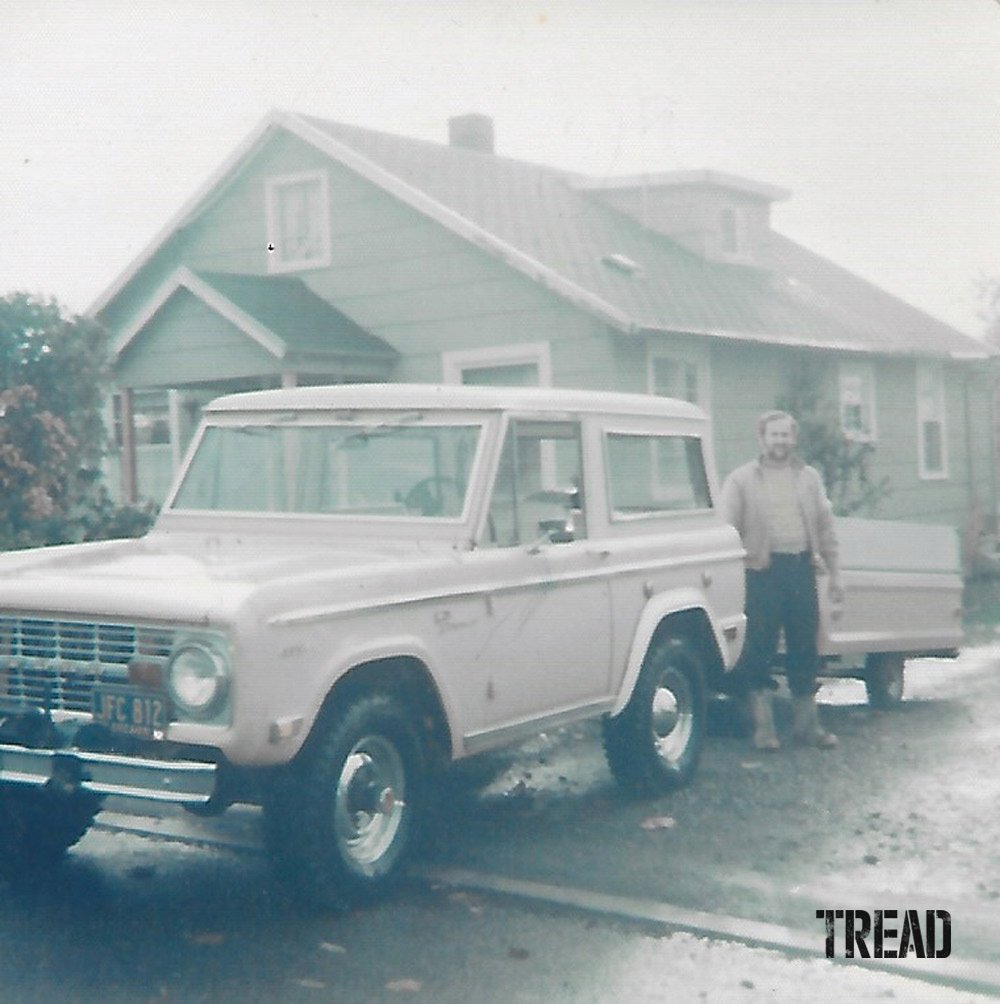 Dennis Wolf proudly stands next to his ’69 Bronco. Little did he know then that the family would cherish it as much as him.

Sisters Melissa Vander Wilt (42, navigator) and Rochelle Bovee (38, driver) had never rallied before. Shared between them, this vehicle was built up with the help of Tom’s Bronco Parts (TBP), other sponsors, and their family. However, they decided to keep its natural patina to “make new memories with our kids, just as our dad did with us.” They’ve added modern amenities but stayed close to its factory appearance. “I’m excited about the Bronco being a way for me to experience the outdoors in a new way,” Vander Wilt explains, “really getting out there beyond just car camping or driving to a trailhead.”

“Trying their best to nail the prescribed average speed during an enduro challenge.”

Wolf’s family originally wanted to build the 1969 Ford Bronco for overlanding as a second vehicle to support their family of six since they don’t all fit in their Jeep. However, it gave meaning to a bigger purpose: to carry both sisters in the Rebelle Rally as team Roaming Wolves, honoring their love of travel and their dad’s family name. Sitting idle for 25 years proved challenging. Along with the interior’s deterioration, the engine needed massive work. Shortly before the rally, the original 302 lost two cylinders. They had to search for a replacement engine—FAST. With an unfortunate 302 shortage, they found one with a friend on the East Coast. Their 1969 Ford Bronco golden gem now dons a 302 HO from an 1989 Mustang, along with a roller valve train and forged bottom end.

“Kilometers of whoops were no match for the suspension, which kept Vander Wilt and Bovee rolling smoothly.” 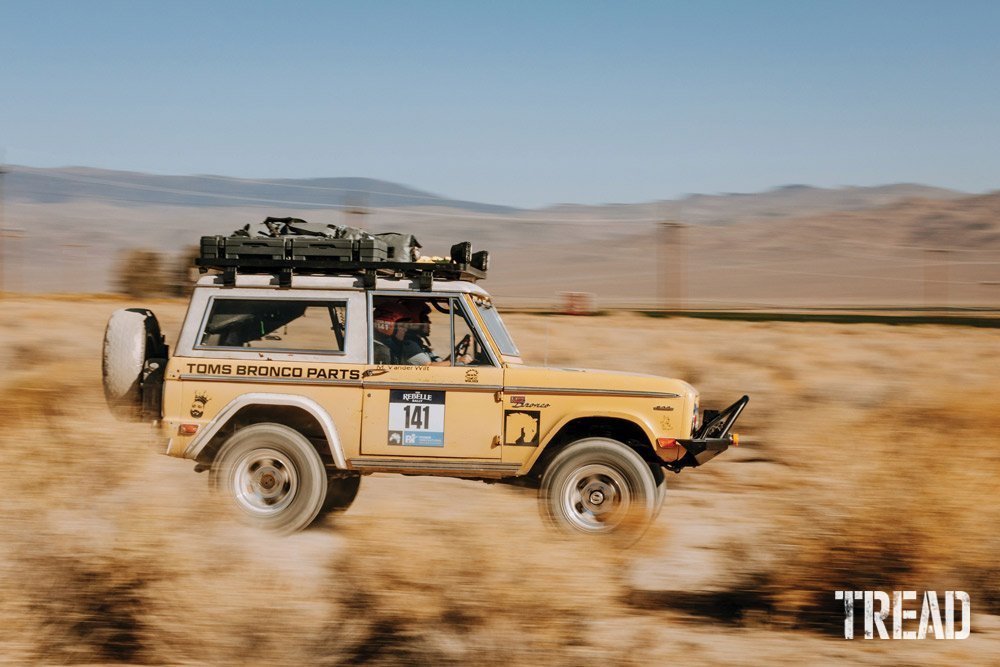 A Dana 30 along with a rare factory power locker enjoys life up front. To this they added TBP Dana 30 Trail Terminator chromoly axles. They’re induction hardened and dual heat treated, making them one of the strongest chromoly axles available on the market today. In addition, the rear is outfitted with a Ford 9-inch and factory Trac-Lok differential.
Team Roaming Wolves went with an exclusively designed suspension system: a TBP 2.5-inch lift that includes progressive rate front coil springs and stout nine-pack leaf springs for the rear. A TBP adjustable track bar with drop bracket, Hellwig front sway bar, and Energy Suspension poly bushings throughout the Bronco upgrade the suspension and ride quality.
Polished aluminum Indy Mags from U.S. Mags wrapped in Milestar Patagonia Mud-Terrains round out the bit. They were added to ensure the sisters had enough grip on a variety of terrain, which included dirt, mud, rock, and soft sand. 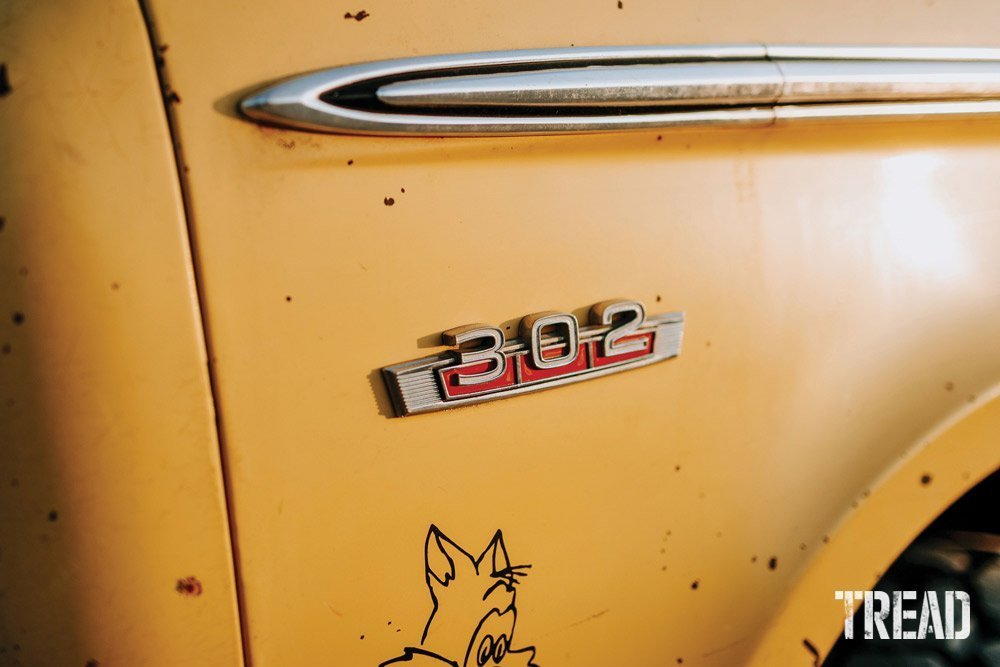 “My husband has been in the automotive aftermarket scene his whole career, and, therefore, so have I,” Bovee says. “Our vehicles are built to perform, and being self-reliant is important to us when we’re traveling or hitting the trails.” As a family, their favorite thing to do is get out to the middle of nowhere, so they need to make sure their vehicles—including the Bronco—can take them there and get them back home. Undoubtedly, when the Rebelle Rally was on the horizon, they had to outfit their dad’s beloved 1969 Ford Bronco with guts before it could claim glory.
The team didn’t have much seat time with it before leaving for the rally. Its proving grounds would be the Nevada and California deserts, along with the famed Glamis sand dunes lining the Mexico border. This proved especially taxing since the duo didn’t have air conditioning. 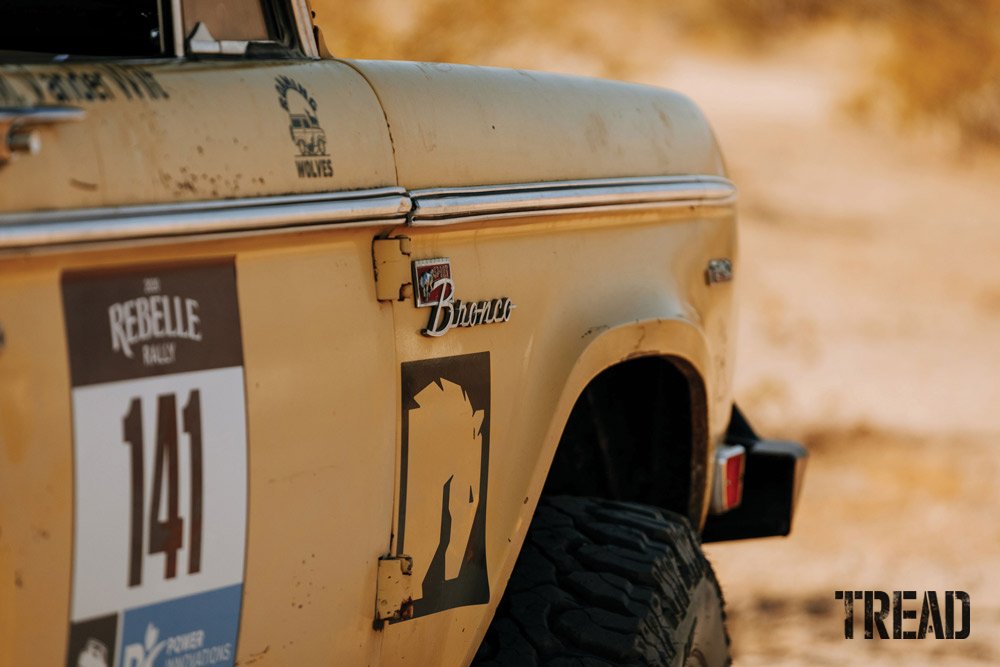 Sponsor TBP helped get Wolf’s Bronco on the road again and the ladies through the rally.

“It’s amazing that we finished the work on the Bronco and got it there, and even more amazing that we crossed the finish line,” Bovee states. “With the new-to-us engine going in around two weeks prior, the rally proved to be the ultimate shakedown.” The sisters faced mechanical issues along the way, but their memories, to them, are priceless. “She wasn’t completely ready this time,” Bovee says. But, the duo finished the rally with the help of the Rebelle Rally staff and mechanics team, as well as other competitors.

“I have a really vivid memory of driving around in the Bronco with Dad when Shelly and I were young,” Vander Wilt exclaims. “We were listening to Roy Orbison on the 8-track [player] and just cruising around. I think that same day the steering went out on the trail, and Dad did his usual thing, MacGyvering it so we could get back home, probably with little more than a paper clip and rubber bands.”

“Fueled with little coffee, but all the jitters, Vander Wilt and Bovee head out through our first start line of the 2020 Rebelle Rally.”

To fix those issues the team installed a TBP 1969 replacement steering wheel with an adapter to work with their 1974 rebuilt column. They also added a power steering gear and pump from a 1974 Bronco (it had stock manual steering). The pair upgraded other OE items like adding a TBP Trail Terminator heavy-duty Heim steering linkage kit and an Icon Vehicle Dynamics pass-through steering stabilizer. 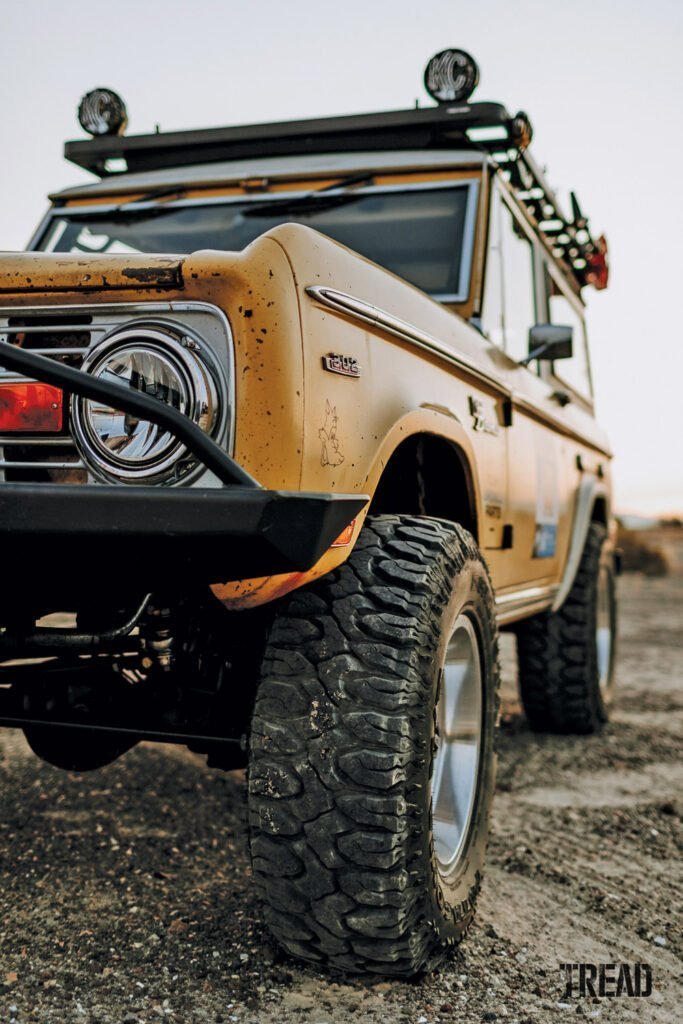 No matter the terrain, Milestar Patagonias never let them down.

“My favorite modification has to be the steering and suspension mods,” Bovee says. “I’m just so impressed with its handling on the highway and on the trail.” She adds, “the steering is precise and responsive, and the ride is comfortable.”
Although the 1969 Ford Bronco struggled to change between 4L, 4H, and 2H when needed and threw alternator belts, the team made decisions based on “her” performance that steered them away from checkpoints they wanted. However, the Bronco “handles like a dream. The components and upgrades we had installed during the build worked wonderfully.” 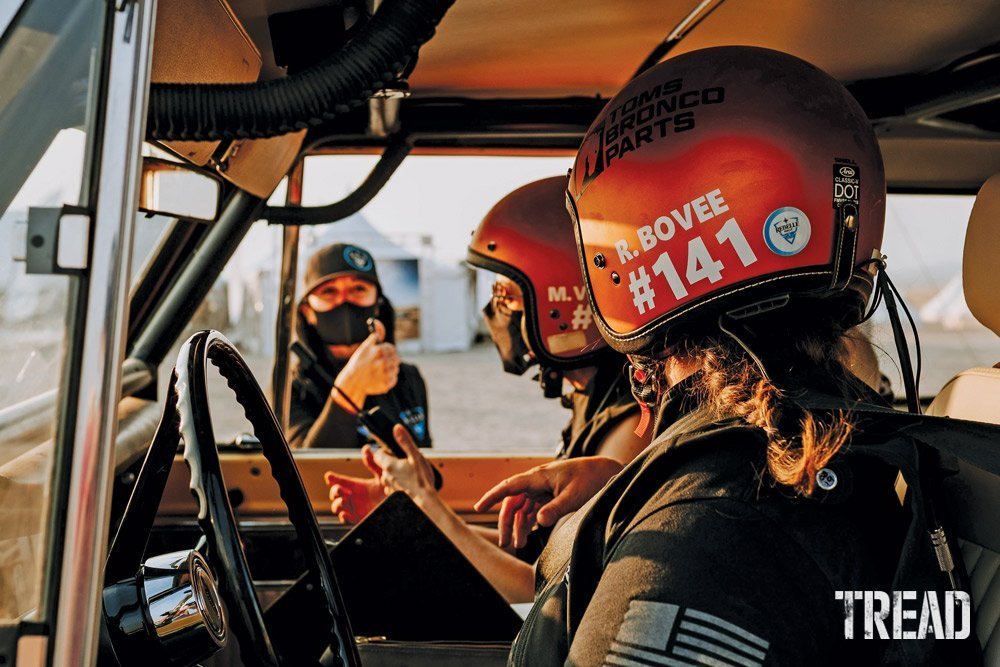 Getting the “good to go” after a late start off the line due to a failed neutral safety switch.

“I don’t regret entering a 51-year-old rig into the event one bit,” Vander Wilt exclaims. “Even with the challenges we faced.” It goes to show that running the Bronco was awesome. Everyone was excited about it. “We had people constantly coming up to us to share their own story of a classic Bronco or some other early vehicle they loved,” she says. “People were truly inspired to see an oldie but goodie out there and the enthusiasm and support we got as a result was fantastic.” She and Bovee both believe that people really love a vehicle with a story and some soul. Between the MagnaFlow and the M/Ts, the intercom was crucial for the rally. The Warn XD9 made little work for the sisters when helping friends out in the Glamis dunes. At 51 years old, the Bronco is only getting started.